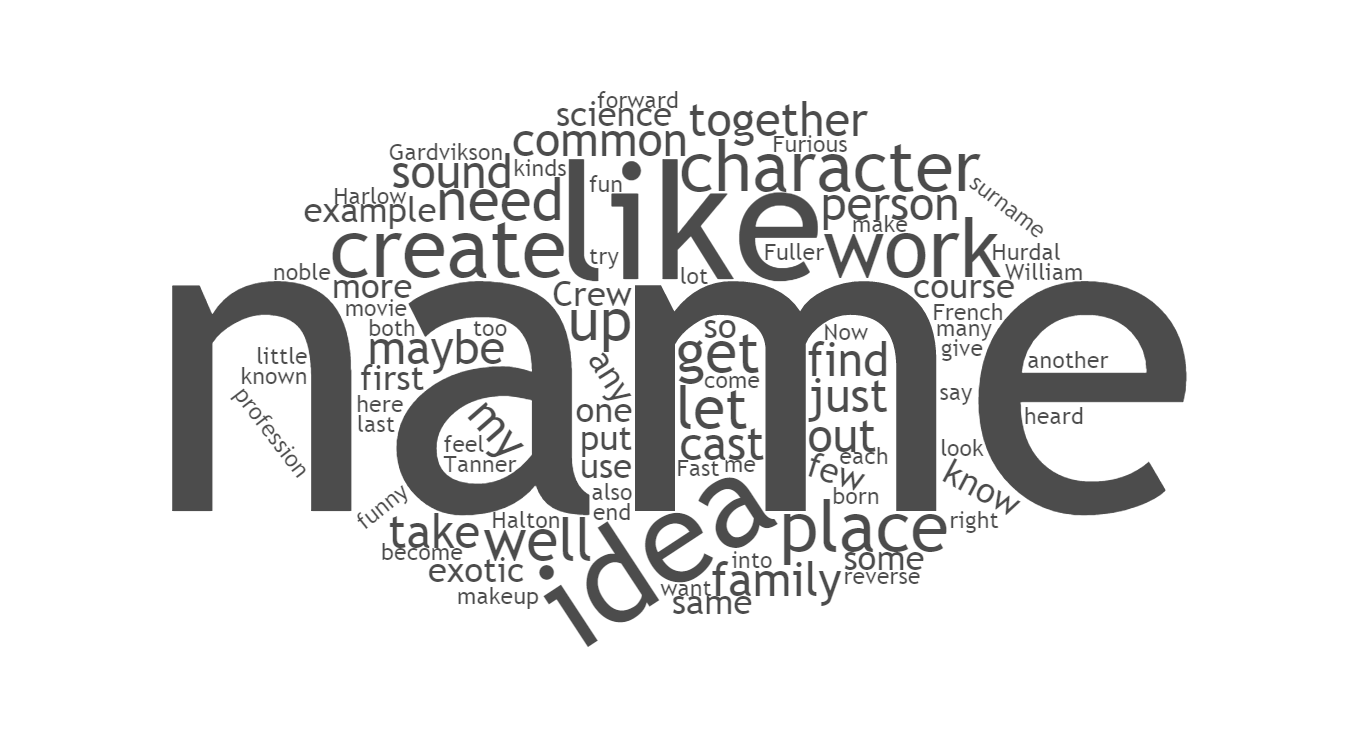 Over the years, I’ve heard a few authors complain, “Finding names for my characters is hard,” or, “My character names seem cheesy.” In a lot of my writing exercises, I feel like I struggle with character names too. But, lately, I’ve been experimenting with a few ideas that have turned out well.

This is the most effective idea in my list and may be the only one you need. Fire up your favorite movie and forward to the end credits (or, you know, use imdb.com). Skip the A-List cast names and get into the costume, casting, makeup and production crews. The names here cover the spectrum of common and unique names from all kinds of backgrounds and ethnicities. Simply find a few names and combine one person’s first name with another person’s last name and, voilà, you have a character name like, “Edouard Niederbaumer” or “Viola Stratton.” Both of these names were created from the Makeup Department of Fast & Furious (2009). You can even throw in a middle name or initial, like “Julian Lynn Ward” or “Sara E. Rodgers.” Of course, it’s up to you to pair names that sound like they work together, or heck, make them not work to appear as if the name is a fake alias, or the person is the child of cruel parents, “Yesim Flowers” is also created from Fast & Furious (2009).

Maybe these names follow too many of the contemporary patterns of child-naming and you’re looking for something a little more, 1930s. Well, dig up an old movie, like Wings (1927), and put together names like “Clarence Kavanagh” or “Sterling Vandenberg.”

Or, if you need a French name, find yourself a French film, like Amélie (2001), and pull the same trick to get names like, “Sophie Bressollette” or “Jean-Marc Duranteau.”

This is fun, right?

Okay, those names work great for some stories, but what about a fantasy novel? We want more exotic and fanciful names for these kinds of works and the Cast and Crew approach doesn’t work out as well. Try this idea instead. Many names are born out of noble lineage, the places that families are from, or from the profession that a family is in. For example, the last name “Williamson” is literally created from “Son of William,” owing to some famous or well known person named William. “Colton” is a surname for people from “Cola’s Town.” And, “Tanner” is from a family known as professional tanners. And, while this is used for surnames, typically, it’s not unusual to also derive common names, or first names, from the same logic.

So, let’s say for example, we want a nobleman with an English-sounding noble name. Let’s dive into Google maps and look across the UK for a place that might serve as a good common name, like “Harlow.” Now, let’s find another place, like “Corwen” and add “-son” to the end to give us, “Harlow Corwenson.”

But, we need a common name, like “Halton Fuller” which is created by taking a place and a profession and putting it together.

And, if you need more exotic names, like a Viking name, just change the place to a Scandinavian country and apply the same process to get, “Hurdal Gardvikson.”

But, what about science fiction? Well, for our Earth-descendants, maybe names will be born out of science. There’s plenty of exotic scientific terminology to be found. It’d be easy to use some cutting and slicing to create “Degen Fermion” or “Spinor Hermitian.” And, before you say those sound funny, just remember how funny “Mazer Rackham” sounded when you first heard it.

The final idea is for the alien, the unknown, or the ancient evil. This one takes a little effort to get it to work right, but the idea is pretty simple. Using the techniques above, come up with a handful of names. Then, take each name and create a phonetic reversal of each. So, for example, “Halton Fuller” would become “Relluf Notlah” and “Hurdal Gardvikson” would become “Noskivdrag Ladruh.” Now, take single syllables from both sets of forward and reverse names and put them together to create “Skivlah Hallufdrag” or “Notmesiy Newroklah.” There’s lots of room for creativity here, so have fun.

What’s in a Name?

Of course, with any of these ideas, you’ll need to make sure the name fits the character. Maybe, these ideas are just germination for better ideas or maybe they just work to break the creative-blocking crust off your brain to get you thinking again. Give them a try and let me know what you come up with.